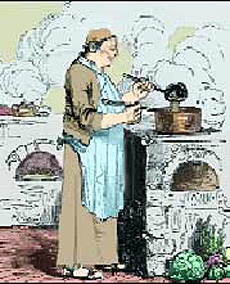 Brother Lawrence was a 7th century Carmelite lay brother. He was a soldier in the Thirty Years War in his teens but joined the Carmelites shortly after being discharged from the army following an injury.  In the priory, he worked in the kitchen and as a repairer of sandals. It was the Abbe de Beaufort, the Cardinal de Noailles’s envoy and investigator, who brought Brother Lawrence’s approach to life and faith to the notice of the outside world. Interviews with Joseph de Beaufort and a few letters are his only written works and it is them that make up The Practice of the Presence of God which you can read in its entirety here (about 20 pages).

The most relevant sections are below:

From the Eighth Letter: on prayer and dealing with distraction:

You tell me nothing new. You are not the only one who is troubled with wandering thoughts. Our mind is extremely roving. But the will is mistress of all our faculties. She must recall our stray thoughts and carry them to God as their final end.

If the mind is not sufficiently controlled and disciplined at our first engaging in devotion, it contracts certain bad habits of wandering and dissipation. These are difficult to overcome. The mind can draw us, even against our will, to worldly things. I believe one remedy for this is to humbly confess our faults and beg God’s mercy and help.

I do not advise you to use many words and long discourses in prayer, because they are often the occasions of wandering. Hold yourself in prayer before God, like a dumb or paralytic beggar at a rich man’s gate. Let it be your business to keep your mind in the presence of the Lord. If your mind sometimes wanders and withdraws itself from Him, do not become upset. Trouble and disquiet serve rather to distract the mind than to re-collect it. The will must bring it back in tranquility. If you persevere in this manner, God will have pity on you.

One way to re-collect the mind easily in the time of prayer, and preserve it more in tranquility, is not to let it wander too far at other times. Keep your mind strictly in the presence of God. Then being accustomed to think of Him often, you will find it easy to keep your mind calm in the time of prayer, or at least to recall it from its wanderings. I have told you already of the advantages we may draw from this practice of the presence of God. Let us set about it seriously and pray for one another.

From the Fourth Letter: Brother Lawrence describes his lifestyle (in the third person):

I am taking this opportunity to tell you about the sentiments of one of our society concerning the admirable effects and continual assistance he receives from the presence of God. May we both profit by them.

For the past forty years his continual care has been to be always with God; and to do nothing, say nothing, and think nothing which may displease Him. He does this without any view or motive except pure love of Him and because God deserves infinitely more.

He is now so accustomed to that divine presence that he receives from God continual comfort and peace. For about thirty years his soul has been filled with joy and delight so continual, and sometimes so great, that he is forced to find ways to hide their appearing outwardly to others who may not understand.

If sometimes he becomes a little distracted from the divine presence, God gently recalls Himself by a stirring in his soul. This often happens when he is most engaged in his outward chores and tasks. He answers with exact fidelity to these inward drawings, either by an elevation of his heart to God, or by a meek and fond regard for Him, or by such words as love forms on these occasions. For instance, he may say, “My God, here I am all devoted to You,” or “Lord, make me according to Your heart.”

It seems to him (in fact, he feels it) that this God of love, satisfied with such few words, reposes again and rests in the depth and center of his soul. The experience of these things gives him such certainty that God is always in the innermost part of his soul that he is beyond doubting it under any circumstances.